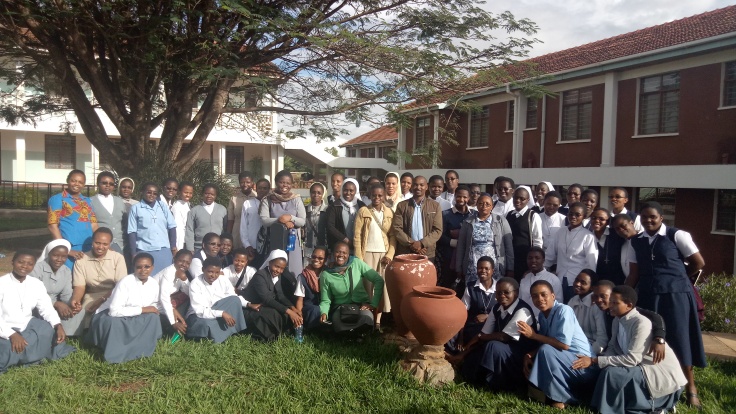 Christianity has been around in the world for the last 2000 years. We do not know how long it will continue until Jesus returns as he promised (2 Tim 4:1). Here in Africa, Christianity is between 150 and 200 years old depending on which part of Africa you are. Catholicism is one of the major Christian Churches in Africa.

When it was first preached, it was presented as a faith based on a lot of Charity. When the missionaries came, the brought with them a lot of goodies from the West. They built schools, Hospitals, Churches and other humanitarian amenities such as portable water projects, electricity among others. Apart from the fact that education was free of charge, they also sponsored many African young people to study in their home countries. Some of these lucky ones are the ones who brought agitation for freedom and self rule of African nations from the colonial powers.

Slowly the Church grew in the numbers of converts and as new generations were born into Christian families, the African Catholicism began to take root. Religious Congregations started admitting African young men and women into consecrated life. This was not so easy in the beginning because everything Christian including religious life was purely Western.

There were a lot of prejudices and stereotypes against the Africans and their cultures.

As the Vatican II spirit began to permeate and Africans were allowed to inculturate their Africanness into the Catholic Worship, religious congregations began to trust Africans with even leadership positions including African formators. However, the prejudices continued to influence many aspects of religious life.

Today in the 21st Century, things have really taken a huge leap. As the West continue to experience massive secularization, Africa has been experiencing what we can call explosion of Christianity in all its forms. Apart form Catholicism, the Pentecostal and Evangelical  churches have taken a new face. There are so many small Churches all over the World. This has a great deal of confusion that has also spieled into the Catholic Church.

Advancement in science and technology has also wrought a good tidings as well as its fair share of challenged in Christianity and Catholicism in particular. Religious life has not been spared of these challenges neither. In this era of globalization facilitated by easy communication technologies, one needs to be very well trained to sieve good stuff from chaff. This is a big challenge especially when there is so much good and fake information available to everyone on the palm of their hands.

As the saying goes, “Everyone is a Child of his or her time”, we are talking of new religious candidates who are the children of the 21 Century and all this means. Religious life just like all the other aspect of human life, need to adapt very carefully to this era.

What is the Directions to take

It is out of this perceived necessity that the Unity of Religious Congregation in Arusha, Tanzania organized a Seminar on the topic of Religious Life in the 21st Century. I was granted the blessed opportunity to share my experiences and suggestions to 70 young novices from 9 different women religious congregations.

The five-day seminar opened a very interesting forum of discussions towards understanding of the topics on our programme. These included:

Day 1: Consecrated life in the 21st Century –  how the rapid advancements in Science and technology are affecting religious life.

Day 3: Symbols of Consecrated life in the 21st Century (Evangelical Counsels) and what they mean in simple terms.

Day 5: African religious men and women and their contribution to the growth of Catholic Church in Africa.

It was a very intensive week. We had three sessions in the Morning, i.e.,  Input, group discussion and group presentations and two sessions in the afternoon, i.e., Input and open forum (what each novice was carrying in their basket after the day long reflections).

I strongly believe that as the world experience rapid changes that are affecting all the facets of human life, religious life cannot remain stagnant or conservative without revising the things that are obviously affected by the change.  Religious congregations need to advance their candidates with relevant life-skills to face the realities of this new life.

The challenge is that many of the people entrusted with the formation of the new religious persons are immigrants to this Century whereas majority of the formees are either natives of the the Century or at least grew up during the beginning of the Century. It is obvious that the life experience of these two characters is very different in many ways. However, I do not think that the young ones are the ones to slow down so that the immigrants can catch up with them. It is the old folks that need to carefully study the life situation of these young ones and adapt formation to their understanding without compromising the fundamentals.

I believe that God continues to call young men and women to religious life and priesthood despite the challenges. Challenges should never discourage but rather incite new beginning s.