When I Joined the Society of the Divine I was fascinated by the Bible chart I found on the wall Of the then Soweto parish house, that later became formation house for the aspirants.  This was the version made in Ghana and I can say I learnt quite a number of things from it.

This chart has been displayed in our parishes in Nairobi but since it is in English,  our missions in Tanzania could not benefit from it, since the language used is Kiswahili.

Since I began my mission here in Arusha, Tanzania, I have been noticing a big gap in terms of digital and print pastoral material in Kiswahili.  Communication being part of my favourite occupations, and having studied it, I have always believed that every good message should be communicated effectively so that it can benefit as many people as possible.

Therefore,  after carefully studying the previous English chart,  I decided to take upon myself the responsibility of making the same available to swahili speakers in Tanzania and East Africa in General. 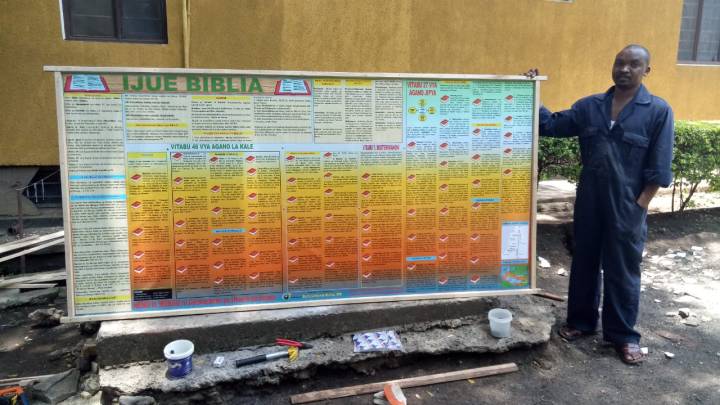 However,  Being in a busy parish,  I do not have the luxary of time. I also did not want to translate the English version directly because I realized that there were a number of things that needed to be updated, especially owing to the fact that in the last few decades, a lot of biblical research has revealed a number of errors previously committed.

I must mention that our confreres working in the Bible office, that is, Fr.  Wojciech Zipula and Br.  Douglas Simonetti,  have helped a great deal to correct the errors and come up with a clean chart.

It is my hope that this chart will help many to understand the message of the Bible that cut across all the books in a brief way.