When I decided to join the seminary and become a priest, my primary motivation was to work with the young people, sharing with them the many talents I discovered I had since my childhood, but more importantly helping them to discern their potentials and use them to make their lives better. Little did I know that this ministry would become very important in my life and mission as a missionary.

In order to fruitfully work with the youth, there are a number of basic things one has to know about them: First, that the current society has a very negative attitude towards them and they know it, so one has to go against the wind in order to win their confidence. Second, that the youth need a lot of trust and confidentiality when they are sharing about the things that concern their personal lives. Third, that the youth need to be told things repeatedly for them to make sense of them, so patience is a key ingredient. Infact there is a refrain in Kiswahili that says: “Wazee ukumbuka lakini vijana ukumbushwa” (that the old remember but the youth are reminded). Fourth, that to be able to help the youth, one needs to be a compassionate listener. Fifth, that one cannot expect the youth to think and act like adults before they are ones, they have to be allowed to be their age, The one who wants to hels is the one to adapt to their environment, learn their language and try to be one among them. 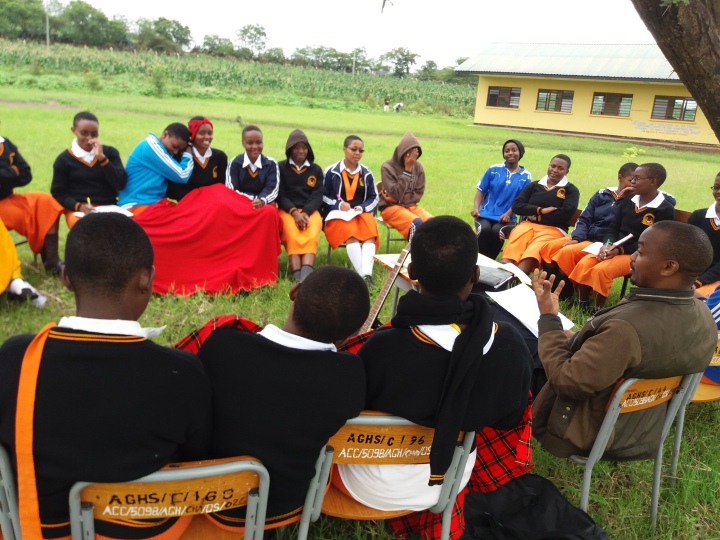 Having this in mind, I set out on a journey to discover the world of the young people being young also, so as to be of help to them. One of the things I discovered is what I would like to call “the killer disease of the youth” and that is really affecting many of our young people: SILENCE. With all the stereotyping and negative attitude propagated by the adults against the youth including their own parents, majority  of them seek refuge in the world of silence. They chose not to talk about their issues and struggle with them on their own. When they are overwhelmed by theirs struggles, the silence graduates to hopelessness and the monster called dipression is let out. The symptoms start showing in their performance in school, their health, attitudes, and little by little they stop putting any effort in anything. Among the many causes of this is the I have discovered, is instability and other problems in the family. These includes: separated parents,  absence of one parent, sick parents, among others. The prolonged state of hopelessness turns to self pity and anger towards life and everyone everthing else at large.

In my accompanyment encounters with of them in the schools and the in parish, the biggest task above all has been creating an environment of trust where the young people feel loved and cared for and are assured of utmost confindentiality so that they can open up and talk about their problems. The example of Jesus the compassionate listener has been my inspiration. Many passages in the Gospels depict personal conversations Jesus had with those who needed healing. Considering the fact that in his time there was a lot of social segregation, Jesus always took time to to listen and even argue with different groups of people, regardless their social status.

This is our Christian vocation. To listen to the people as Jesus did, especially those of us tasked with the responsibility of shepherding the people of God. Making the young people understand the unconditional love of God no matter the circumstances in which they were born or their current situation, is the best way to start in the journey towards healing. There are just too many young people out there in very debastating situations. This raises a lot of concern about the kind of the society that we will have when these young people will be adults.

What can be done: In order to salvage our young generation, I am convinced that, first of all, the society and especially the parents need to change the negative attitude towards them from that of prejudice about their age to that of understanding care. Parents need to let their children know confidence fro their early, by being mothers and dads and not suppliers of basic needs. We know that no parent would want to cause harm to their children but the problem is many of the things that the parents do or say to their children have negative results at the long run. Many youths intrepet the strictness and rigidness of their parents as hatred and a proof that they were not wanted in the first place, just because the parents have not time to listen to them or explain to them the WHY of things.

Today, after the age of 14, dialogue and openness in all matters is very important in the parent-child relationship. This is the time to tell them about their absent Fathers or mothers. Many have confessed to me that asking this question has always been a cause of quarrels and scolding by their parents. The best thing we can wish for our children is to live better lives that we are living. Hiding important facts to them does not help at all, but rather works negatively in their development. Providing basic needs and bribing them with gifts to compensate the lack personal relationship with the children is disastrous in the long run. In this case I always try to ask the youth to understand some of the reasons that make their parents adamant to talk about the sensitive issues like the absence of one of the parents. That it is not because of them (the youth) but their parents  may be have never been able to overcome what happened to them in their youth days.

After discovering all this, I have since tried to study more about the world of the youth and the things that affect them and how best they can overcome them. But above all the compassionate and understanding accompanyment in their journey of sef discovery has been the most effective of them. Many have opened up to a totally new chapter in life after they have got a chance to tell their stories. Many of them being the first time that they ever opened up to someone. I always tell them that I do not have answers or any special cure, but rathervthey are the only ones who can heal themselves by opening up to understand their past, and working in the present to shape their future. It is a mission not so easy but worthy every effort possible.